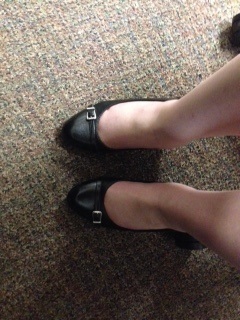 “Woah!  Is that normal?!!” my friend and coworker, Jack, exclaimed as we sat on the bench at lunchtime.

“You mean these Incredible Hulk feet?  Yeahhh, not so much,” I replied.

Filed away in some teeny weeny “Future Useful Information” cabinet in my brain, I recalled how months earlier my doctors described that I may notice some swelling in my feet as I transitioned from the insulin pump back to multiple daily injections after a decade of pumping.

In layman’s terms regarding “Swelling Feet 101”- because I have a very basic understanding of this very complicated medical scenario- we would expect to see some swelling, particularly of the feet, due to my body readjusting to normal-ish blood sugar values.

While experiencing the high frequency of my insulin pump problems in the fall/winter, my body was more or less in a prolonged ketonic state.  With almost every site change, ketones built up, and it took hours to recover.  On especially rough days, I sometimes experienced multiple site failures, pushing the recuperation process even farther behind.  Once the problem was rectified, it was time for another site change, and often this process began all over again.  Not fun.

When ketones pop up, your body burns fat for fuel, and you dehydrate and do not absorb food properly.  Hence, the overall zombie apocalypse feeling that ketones carry.  During this time period, I was gaunt, hungry, and tired.  My body became accustomed to this unhealthy status quo of spilling ketones, flushing them out, and starting all over again once a new problem arose.

Shots mostly erased this high ketones song and dance. Insulin was regularly getting into my body via injections, so the ketones did not have a chance to compound like they had in the past. Although I felt infinitely better without ketones, my blood sugars were far from stellar for the first few months back on shots. There was a lot of back and forth figuring out proper basal rates, insulin to carb ratios, and correction factors. And, in diabetes’ signature fashion, it usually changed its mind once we seemed to iron out some details.

I am still not the poster child of superb blood sugars or a brag-worthy A1C, but my numbers are beginning to stabilize. Interestingly, I am seeing improved blood sugars with a significantly-reduced basal regimen. In the past, the basal was too high, prompting big crashes and consequential reactionary blood sugar spikes. In other words, the diabetes rollercoaster had a lot of peaks and valleys.

So, recently when my feet looked like the Wicked Witch of the East’s heels poking out from under the house that crushed her, it was actually a positive thing. Luckily I had a doctor’s appointment the following day, which confirmed that this was the swelling we had initially expected. It had not appeared when first back on shots because my blood sugars had remained erratic, despite the lack of ketones. Now, my body is getting more of the fuel that it needs and the insulin to cover that fuel, so as it rehydrates, there may be some temporary swelling.

As with anything diabetes-related, it’s never really simple, is it? Thankfully, in this situation, the unpleasantness is only brief and will not cause any permanent problems.  The only other issue is that I am having muscle spasms in my feet and legs quite frequently.  I have experienced muscle cramps since childhood.  Although this is nothing new to me, I could do without the intensified “Charlie Horse” occurrences.  The doctors believe this number will decline as the swelling in my feet lessens over time.

Finally, my high heels game is taking a hit here.  But who doesn’t want to wear sandals or Sperry’s in this awesome weather, anyway?  Bring it on!  #ItMakesSenseIfYouHaveDiabetes