“And a lemon donut, too,” he almost whispered, hoping my four-year-old, newly-diagnosed-with-type-one-diabetes self would not notice the snack he was sneaking home.

“You want a plain donut?” he squatted down to ask.

With wide eyes, I scanned the row of baked goods in front of us.  Jelly, strawberry frosted, sprinkles- all of the things that even my young mind comprehended as off-limits.

“No chocolate.  You can have a plain donut, okay?” Dad offered in a tone that feigned the appeal of a donut whose very name was inherently boring.

“I don’t care,” I replied calmly, the first of many times this phrase would be uttered mostly to convince myself that diabetes did not hurt me, but also to protect those who loved me from seeing that it did.

“Ha!  You can have a plain one!” laughed a stocky truck driver in line behind us.

Dad hadn’t heard him.  I buried my face into his leg while he paid for our order.

My lip quivered on the car ride home.

“A man in there teased me about the plain donut!” I screeched.

“What?!!  Who does he think he is?  You just remember- your Dad is the strongest man in the world.  Nobody will ever mess with you!” my father advised.

I chose to believe Dad over the late-1980s version of what we now call a “diabully.”

And the plain donut wasn’t that bad, either. 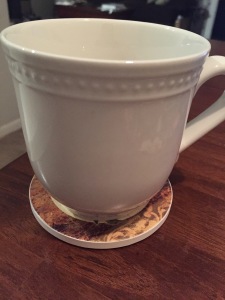 2 thoughts on “The Dunkin’ Donuts Vignette”