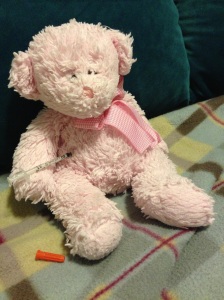 I could write a 200-page manifesto about the ups and downs of 2014 while insulin pumping and then transitioning to shots, but for the sake of not straining our eyes by reading a mile-long exhaustive blog post, here are some main points worthy of highlighting:

Consider this a big virtual hug to each of you for being my sounding board during a trying time in my diabetes journey.  Knowing that someone out there was reading this and perhaps going through a similar trial, receiving innovative suggestions to insulin management, perusing your blogs and tweets, and overall feeling the strong sense of community is what made the hardest part – taking the first step, or, in this case, the first shot – totally worth it.

My long-term plan is to continue this shots trial for another month or so and then perhaps switch back to the pump with reduced pump basal rates and some background injected Lantus basal as a precaution for faulty-pump-site days.

I feel blessed to have made so many friends in the diabetic online community and to have a health care team that has steadfastly worked to make me feel better.  One day many months ago, when my head spun from ketones-induced nausea after another failed pump site, I thought to myself, Maybe I should start a blog?  There must be someone out there who “gets it,” too?  Today, having been encouraged to fight for my health through the inspiration of the #doc, I lift my very light, no sugar coffee cup to you.